She knocked me out with her old school art patron look, kept expecting her to get rowdy. 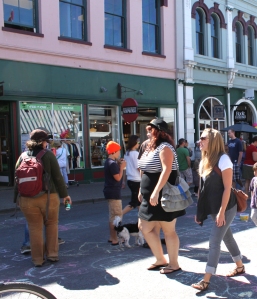 the advance platoon for the field hospital

To dream that all your clothes in the closet are white, suggests that you need to lighten up. You may have recently been feeling a little depressed. Perhaps you are going through some crisis. It is time to move on. and change your attitude. You need to better get a grip of your inner emotions.

...or dream about The Man in White

What's your shirt? House of Sasquatch

I'm going to catch a hundred butterflies, some blue but mostly red, because they remind me of you.

I want to pick up the pieces of you and glue them back together.

Dad, I still hate you.

aight so you got the thing wrong man… they are not ONLY made to skate either, i dont use them to skate, but i heard theyre good shoes to skate in. ...

I ride my bike, I roller skate, don't drive no car Don't go too fast, but I go pretty far 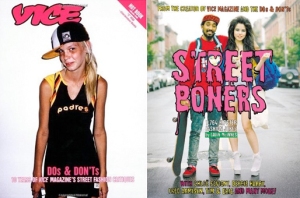 What are we doing when we take a photograph of a stranger in the street? Capturing how others live and engage with the world, revealing bodies, consciousness, intimacy, power– I’m wondering how a brief photographic encounter can be responsible for all this? Photographs are accessible, easy to take, easy to share. The street however is unpredictable strolling out a living in the random to the exotic. I want to look more closely at the geometrical hot spot between street and photography by comparing the fashion photographs in Vice Do’s and Don’ts 10 Years of Vice Magazine’s Street Fashion Critiques and Street Boners 1,764 Hipster Fashion Jokes with the street photographs of Juergen Teller, Helen Levitt, Robert Frank and Nan Goldin.

First, the terms “street” and “social” photography need to be clarified. Street photography is here and there, capturing all people, places or things: widespread, anonymous. Street photography is not about reporting the news, “there is no specific subject matter only the general issue of ‘life’ in public spaces”[i]. A definition of social photography by wikipedia states: “it is a subcategory of photography focusing upon the technology, interaction and activities of individuals who take photographs and use digital cameras, photo sharing websites and Internet enabled methods of social networking”.[ii] According to flickr it is: “Your photos – everyday captures and extraordinary sightings, local scenes and exotic moments – are central to our DNA because they reflect your individual stories”.[iii] Both definitions stress the “individual you” not unlike the ads for the first personal Kodak cameras “You press the button, We do the rest”.[iv] But I prefer this definition on social photography by art writer Joanna Lowry “a contemporary photography that is highly conscious of documentary modes of solicitation and address”.[v] I think she means that both photographer and subject are complicit makers of the social photograph. Or more simply social photography means you go to parties and photoblog about them after. If we narrow it further down it is a form of “play”. 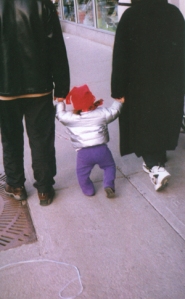 "How you gonna !^#* with this? They are so far over any of our heads, all we can do is step to the left and say "Play through.""

"Voyagers from other planets have not idea what a bum-out their balls are. Look around you, Jean-Francois 3000; your leopard nuts are the End of Days".

"This girl is so out of your league, your only hope would be to befriend her tits first and hope they put in a good word for you."

"It took about half a century but now that mods and rockers are done fighting, we can finally see how breathtakingly gorgeous they are."

"Harley has such a stranglehold on the !#^* biker scene it's nice to see some bitches rocking a Suzuki without a second thought. That's more than heavy metal. That's punk rock."

After I stopped laughing I heard the taboos breaking: swearing at a baby, sexual comments about the subjects, availability of the subjects, mocking and flattering fashion critiques…ok, where did this begin?

In Montreal 1994 Vice Magazine started as an independent arts and pop culture magazine founded by Suroosh Alvi, Shane Smith and Gavin McInnes. McInnes (b.1970) wrote the fashion/style critique commentary in Vice Dos and Don’ts (2004) and now in his independently published Street Boners (2010). Wait a minute, doesn’t powerful, dominant Vogue editor Anna Wintour along with creative director Grace Coddington and their most oft appointed court photographer, Annie Leibovitz, monopolize fashion? Vogue may deserve a blog post of its own but for now I’ll sum it up as: a power crazy fashion magazine that features branded designers and tries really hard to sell you something. An August 21, 2007 the headline from associated content reads, “Vogue Announces that September Issue Will Have the Largest Amount of Ads Monthly in the Consumer Magazine History: 840 pages”. [xii] Didn’t Adbusters, the not-for-profit, anti-consumerist magazine organized in 1989 in Vancouver, reveal that all advertisements are a form of pornography?

Vice Do’s and Don’ts and Street Boners are a different sort of fashion book; both use humor and satire to sidestep the mainstream’s seriousness of fashion. “Fashion is like a board game or a dance,” says McInnes. Both Do’s and Don’ts and Street Boners stumble upon peoples’ weird experiments in second hand clothing, their re-purposed accessories, homemade failures and fashion imagination. The subjects in the Do’s and Don’ts and Street Boners are often caught at street clothing markets (alternating with doorways, street cafes, house parties and clubs). The subjects are diverse but most are young adults perhaps in the process of leaving family and recreating themselves. The photograph “play through” depicts a deliciously adorable couple, a young man on the right with his arm around a young woman on the left. They are standing in front of a wooden double door, ridiculously drab compared to the couple’s colorful gear. His, a rocket ship themed puffy vest, orange shirt, white skinny jeans and sharp toed white boots. Hers, a black wool sweater, black leggings, two layers of knee high socks, white over red and white stripped with nurse’s white shoes, long blonde hair topped with an oversized red and white polka dot bow mis-matching with the red and yellow cartoon bunny rabbit toy-necklace hanging low on her tummy. The commentary could read: “We are the market. We are the house. This is the revolutionary costume”[xiii]. The couple looks directly into the camera; their gaze, the photographer’s and ours is reciprocal. Also notable is the use of bright flash. The whole image is a little ‘unreal’ perhaps ‘dreamlike’ in the ‘real’ location of the street. It’s a story of gorgeous youth in love with itself.

I don’t know how the photographer is dressed but I can guess at her actions: moving through the street, seeing and reacting—it is a quick exchange, the photographer and the subject negotiate on the spot—actions, reactions and interactions; if they think about the shot too hard, it is gone—click, emotions, body language, eccentricities, humor caught, then the photographer moves on carefully watching for the next chance.

Influential to the street photography in Do’s and Don’ts and Street Boners is Juergen Teller (b.1964) an art and fashion photographer. Consider his photographic album Go-Sees 1998[xiv] full with young girls aspiring to be models that turned up at Teller’s home studio in London un-invited for a modeling audition. Teller says he received them at this door and curious he doesn’t turn them away but doesn’t take them in either, instead he takes their photograph in the doorway. It’s an unpredictable space: are you in or out? The hopeful models want to make a living off their looks – is Teller collecting them like wild deer or is he using his camera to protect his privacy? Some of the girls look ever so lost, others defiant, fashion’s overlooked waste products. Both photographer and subject are aware of the camera and the economic exchange of body and beauty in the fashion industry that traps them in the doorway; in contrast the photographer and the young couple in Street Boners ’plays through” the boundary. 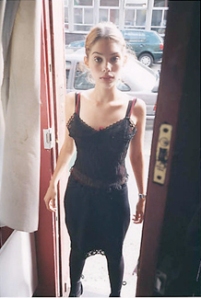 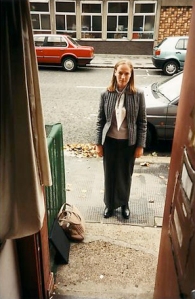 Photographer Helen Levitt (1913-2009) worked daily to capture moments in the NY streets. In contrast to the Vice and Street Boners photographers Levitt did not make herself known to her subjects; she used a discreet method: a 35mm Lecia camera on which she attached a right angle lens allowing her to photograph in secret. Most of her subjects aren’t aware of the camera; Levitt’s actions are silent and observant, the gestures of the subjects are intact, genuine; here anonymity is a privilege. In Levitt’s street photographs we loose the “self’ while watching the behavior of the subject. In contrast the Do’s and Don’ts and Street Boners comment on the manner and vanity of the subjects. 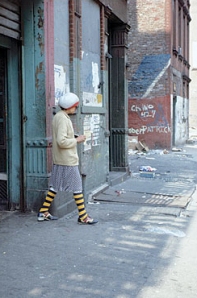 Robert Frank (1955-56) began his photographic career in fashion employed by Harper’s Bazaar, McCalls and Vogue. Frank “created his first hand-made book of photographs, 40 Fotos, in 1946” [xv]. In 1955 Frank road tripped across America for two years capturing an American picture. “This is the way we are in real life and if you don’t like it I don’t know anything about it ‘cause I’m living my own life my way and may God bless us all, mebbe…if we deserve it” echos Jack Kerouac in the introduction to Frank’s book[xvi]. Perhaps Frank’s photographic message was meant directly for Dwight D. Eisenhower, reeclected in 1956 with running mate Richard Nixon, who “largley ignored the civil rights issue”[xvii]. 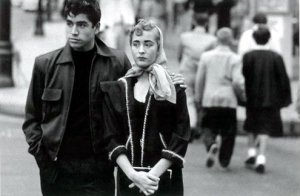 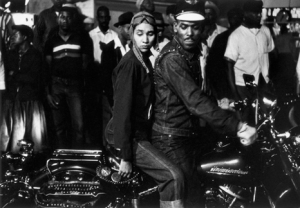 I think Frank’s project The Americans captures the heavy stillness before the race riots. Those in power skew things one way but the people in these photographs see reality; Frank searched and found others like him. The search for finding others like you is the goal that the photographers for Do’s and Don’ts and Street Boners have most in common with Frank; gazing at the people in Do’s and Don’ts and Street Boners we try for fit, we look for mates, search the photos for others like us.

Social photographic encounters imply intimacy. Nan Goldin (b.1953) turned her camera on her personal relatonships and her friends, their parties, drug use, fights, sex and death. Goldin say “When I was 18 I started to photograph. I became social and started drinking and wanted to remember the details of what happened.”[xviii] She describes her photographs as “a diary I let people read”.[xix] 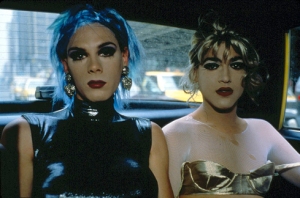 Do’s and Don’ts and Street Boners share Goldin’s mix of desire, identies and the photographic hunt. Goldin’s subjects are her friends and lovers—she constantly shoots them—this pursuit, intimacy-through-photography must bend the relationships. Goldin knows she dirties the air around her by taking a photograph and continues to do it.

Neither Street Boners nor Do’s and Don’ts reach Goldin’s raw level of intimacy, nor Frank’s ready audience, nor Levitt’s invisibility; they do however achieve Jurgen’s level self-consciousness and shared construction of social photography and Street Boners and Do’s and Don’ts give a contemporary position on the garish, the attractive, the pleasure and tedium of dressing ourselves in the rattle of the streets.

Test: Who is the photographer? 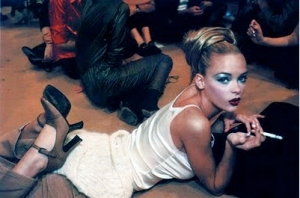 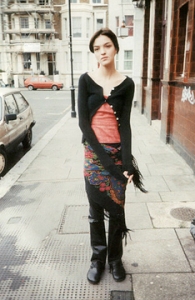 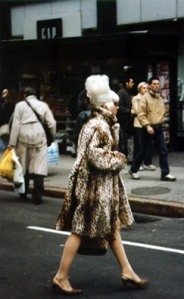